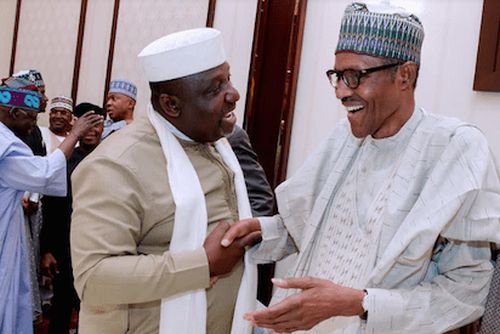 Senator Rochas Okorocha believes that the All Progressives Congress may crumble after the exit of President Muhammadu Buhari and therefore called for an overhauling of the party leadership to avert this.

The former governor of Imo gave this view at an interaction with newsmen in Abuja, after the election tribunal affirmed his electoral victory.

Okorocha said Buhari’s reputation appears to be the binding factor of APC in addition to the fact that the North was arguably the major decider in Nigeria’s politics.

“I have never thought of leaving the party; I feel that time will take care of most things but my only worry is that the party may disappear with the exit of President Buhari.

“For the moment, Buhari seems to be the strongest pillar upon which this party is built.

“If nothing is done to correct the injustices in our party at the national level, then, I fear that this party may disappear with Buhari’s exit.

“Our party is already busy thinking about presidency in 2023 and not supporting the issue of governance which is what we have right now.

“These are some of the problems we have and thinking that being APC is a platform to catch political power.

“People have begun to zone where the president will come from and where he will not come from, leaving the issue of governance; so, these have been some of the challenges we have as a party but I hope they will be addressed.

“But that cannot be complete unless we do some surgical movement in the leadership of the party,” Okorocha added.

He noted that Nigerians would judge their leaders on the basis of what they had done as a government before they could decide what to do with them in 2023.

The former Imo governor further said that he was not in a hurry to make decisions on the next line of action following his suspension from the party.

Governor Okorocha: The Defection Of Our Colleagues Pained Us So Much
Caption This Picture Of Oshiohmole And Okorocha In Aso Rock (Best Caption Wins)
Governor Okorocha Imposes 3,000 Naira Development Levy On Every Adult In Imo State
“Ihedioha Bent On Destroying My Landmark Projects” – Okorocha
Loading...