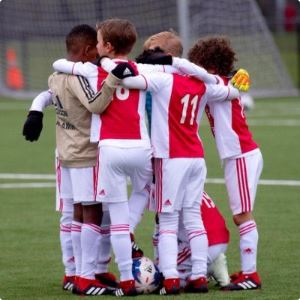 Ajax U12 side recorded one of the most bizarre results in a football match after beating MVV Maastritch U12 by 50-1.

MVV have also lost 13-3 to Brabant and another to Fortuna Sittard by 10-3 before totally falling apart against the Amsterdam side.

But despite being a weak team, it does not warrant a side letting in goals within the space of 20 or 30 minutes. It shows that a goal was scored in every minute in the six-a-side game which is still unbelievable to football fans.

The result comes after Ajax’s senior team made it through to the round of 16 in the Champions League after a 2-0 win against Victor Osimhen’s Lille. They also currently lead the Eredivisie table with six points following the 5-2 spanking of FC Twente over the weekend. 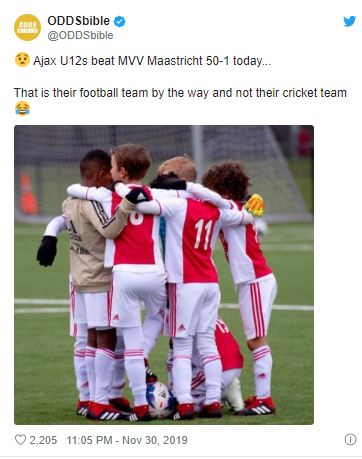 Football: Manchester City Star Unhappy With Life In England
Football vs Music - Which Makes One More Miserable If Not Successful In It?
FIFA Boss Gianni Infantino Wants Harsh Sanction For Racism
Arsenal: Wenger Drops Hints On His Departure
Loading...

They'll surely make it to the Ajax major team 0