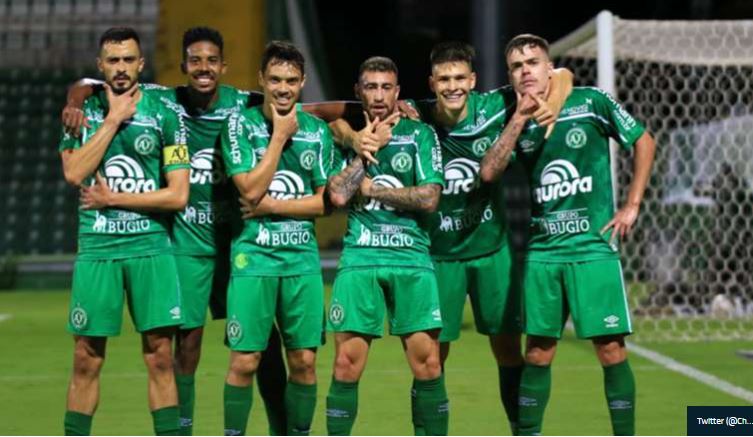 Chapecoense are back “among giants” in the Campeonato Brasileiro after securing promotion from Serie B on Tuesday.

After just one win in their previous five matches, Chape took on Santa Catarina rivals Figueirense at the Arena Conda knowing a win would send them back into the top flight.

They were relegated to the second tier in 2019, having incredibly managed to retain their top-flight status for two straight seasons after an aircraft carrying the squad, club officials and journalists to the 2016 Copa Sudamericana final in Medellin crashed, killing 71 people on board.

Chape were also last December hit by the death of president Paulo Magro due to coronavirus. He began attempts to get the club out of a dire financial situation following the resignation of Plinio David de Nes Filho, who had taken charge following the tragedy in Colombia.

Their funds will be boosted after Paulinho Moccelin and Derlan scored either side of half-time against Figueirense, with Chape holding on for a 2-1 victory after Diego Goncalves scored from the penalty spot, sending them back to Serie A with four games to spare.

“It was not easy to get here. It was much tougher than we imagined, in fact. But with work, humility, dedication, unity and, above all, with the STRENGTH FROM ABOVE, Chapecoense kept its promise. Chapecoense – made for the people, by the people – returned to the place it should never have left.

“It is Chape, of the impossible, of the surprising, of resilience and overcoming, again among giants.

Chape’s poor run prior to the Figueirense clash saw them surrender top spot to America Mineiro, who hold a one-point advantage.

Head coach Umberto Louzer urged the players not to celebrate promotion too hard because he hopes to see them return to the Brasileirao as champions.

“We can look back and see it was worth it. Thank you to everyone who helped us return to the first division,” he told SporTV.

“We still have a few games, we will fight America for the title. We have to celebrate, but rest because we already have to think about the next opponent.”